How to Order Food in Italy: Rules to Eat By

Food and Italy are a perfect pairing – whether we’re talking tasty tagliatelle in Turin, rich risotto in Milan or decadent gelato in Rome.  But, unless you grew up in the Bel Paese, it can be downright confusing knowing how to order food in Italy.

The restaurant rules and edible etiquette are not what you’re used in North America.  So, when you travel to Italy, how do you actually order food? Below you'll find an explanation of the big differences between dining in Italy and in the U.S

WHAT’S THE DEAL WITH ITALIAN MENUS?

If you’re used to eating in American restaurants, you’re accustomed to the entrée and the sides being served together on the same plate.  It’s normal for a main dish -- like steak or chicken – to arrive with vegetable or rice companions. Not so in Italy. The traditional Italian meal unfolds in a series of staggered, separate courses – spanning antipasti (appetizers), primo (pasta or risotto), secondo (meat or fish entrée), contorni (sides) and dolce (sweets).  That’s a whole lot of cibo (food), right?

Well, thankfully, you don’t have to order each course when you dine out in Italy. It’s customary to start with an antipasto and then select either a pasta or a meat dish.  Portion sizes tend to be smaller in Italy, so if you’re feeling extra peckish after walking the streets of Positano, you can go ahead and order both a primo and a secondo.  They will be served in that order, not at the same time.  After dinner, Italians often enjoy a caffe (espresso) or digestivi—liqueurs, like Sambuca or limoncello, said to aid digestion.

Rule to live by: Order only what you want. Even Italians don’t usually order every course.

WHY DO ITALIAN BARS SERVE BREAKFAST?

Bars in North America serve beer. Bars in Italy serve espresso, pastries, and – yes – alcohol.  Ubiquitous in towns big and small, the local “bar” in Italy is a social hub. In the morning, you’ll see neighbors exchanging pleasantries here over a hot cornetto (croissant) or reading the daily paper. While it’s true that bars in Italy do serve alcohol, they’re more where Italians go for a quick caffe or on-the-go bite.  They’re also Italians go-to breakfast joints. Most food and drinks are served at the banco (counter), where guests can nibble or sip standing up.  If you prefer to sit down, be aware that you will pay extra for a waiter and table service.

Rule to live by: If you order a “coffee” at a bar in Italy, you’ll likely get an espresso. American-style coffee, which contains more water than its Italian cousin, is called “caffe americano.”

WHAT DOES APERITIVO MEAN?

Aperitivo is one of Italians’ most beloved early-evening traditions.  Often called Italy’s version of the “happy hour,” aperitivo is more bread than booze, more pasta than pinot.  For the price of a drink, you can chow down on an all-you-can-eat banquet of tasty tidbits – from saucy pastas to fresh mozzarella, from crunchy crostini to shaved prosciutto.  All you have to do is buy one drink.

Rule to live by:  Ask your hotel concierge where to find the best aperitivo to enjoy a smorgasbord of savory Italian bites.

Whether you’re strolling the streets of Sorrento or roving the roads of Rome, you’re guaranteed to spot signs for various Italian eateries – including trattoria, ristorante and osteria. Traditionally, a trattoria is a family-owned, neighborhood eatery. They tend to feel informal and cozy.  A ristorante, generally, is full-service restaurant; they’re more formal and will have a host seat you. It’s common to find a prix fixe menu and sommelier at higher-end ristoranti. In the past, the osteria functioned more like an inn than a restaurant – serving wine and simple dishes made with what's available daily in the markets. Conventionally, the osteria is a modest eating establishment with plenty of wine. That said, osteria is often just another way of saying restaurant.

Rule to live by: Nowadays, the distinctions between these three categories are less pronounced.  Ask to see the menu before sitting down to see if the dishes (and pricing) match what you’re hungry for.

WHY CAN’T I ORDER MY FAVORITE ITALIAN DISH IN ITALY?

American travelers often feel puzzled when their favorite “Italian” dish in the U.S. – say spaghetti and meatballs or chicken parmesan – is nowhere to be found in Italy. Why is this? Doesn’t Italian food come from, well, Italy? The answer is yes… and no.  Simply put, Italian-American food is not the same as what you’ll find in most Italian restaurants once in Italy.  That cuisine evolved in the US, reflecting the tastes of many Italian immigrants — who usually came from Southern Italy.  Additionally, there’s really no such thing as “Italian” food.  Dishes in Italy are very regional. What you relish in Rome isn’t what you’ll mangiare in Milan.

Rule to live by: Ask your waiter to recommend a regional or house specialty. This way, you’ll be sure to savor something the locals love ((and not a dish they’re making to satisfy the tourists’ expectations)).

Unlike in the U.S., water in Italy is not customarily poured into your glass by waiters. Instead, you’re expected to purchase a 1-liter bottle of chilled mineral water.  You can order either acqua naturale (flat water) or acqua frizzante (fizzy water).  Waiters will sometimes ask if you want your water “with or without gas”—translation: sparkling or flat? It’s worth remembering too that Italians do not usually drink water with ice, so your bottle will come pre-chilled.  Tap water, while free, is served without ice and will be less cold.

Rule to live by: Are you feeling fizzy or flat? There’s no right answer here – pick your personal preference.

WHAT IS “IL COPERTO”?

When perusing a menu in Italy, you might notice a small fee called “il coperto” or cover charge.  The coperto is usually a couple of euros per-person and will be added on top of the cost of food.  This small fee often covers management expenses, bread and tap water (should you ask for it).  Some areas, like Rome and Lazio, have banned this practice but it remains common elsewhere in Italy.  Keep in mind that the coperto tends to be pricier if you’re in a particularly touristy part of town -- say, in St. Mark's Square in Venice or next to the Colosseum in Rome.

Rule to live by:  Restaurants operate by different rules in Italy and paying the coperto is the cost of a leisurely meal, where the waiter will never rush you out.

DO I NEED TO ASK FOR MY BILL IN ITALY?

Italians love slow meals shared with friends and family – feasts that roll on for hours and hours.  So, the concept of “loitering” is as foreign to Italian waiters as the idea of paying a cover charge for a restaurant is to Americans.  The waitstaff will assume you’re happily dining with your loved ones and aren’t ready for your bill UNTIL YOU ASK FOR IT.  They’re not ignoring you. They’re not being rude. They’re simply waiting for you to tell them you’re ready to pay. How do you ask for your bill in Italy? You simply flag down your server and politely say: “Il conto per favore!” (the check please).

Rule to live by: Don’t expect the waiter to bring you your bill. You need to ask for it when you’re ready.

SHOULD I TIP THE WAITER IN ITALY? 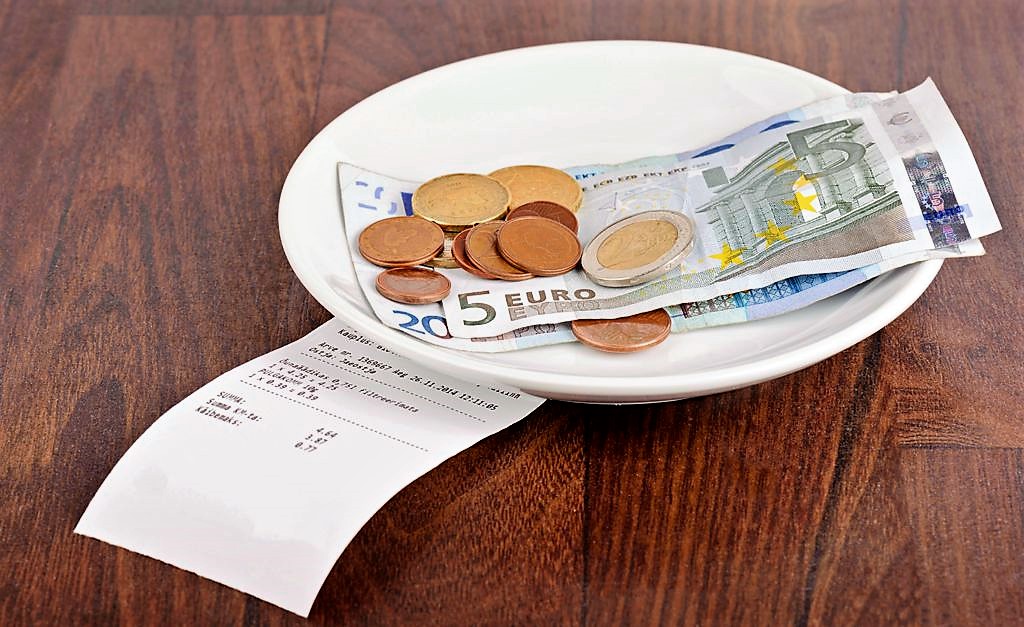 Tipping in Italy can be quite confusing. As a rule, waiters in Italy are paid more than their American counterparts.  They don’t rely on tips to make ends meet. As a result, Italians do not tip as generously as Americans.  In recognition of exceptional service, it’s customary to leave about 1 euro per diner as a way of saying grazie.  Some restaurants will already include servizio (service charge) – in this case, it will be clearly listed on the menu.

For more insider tips on travel through Italy, click the button below:

"We just wanted to the tell you thanks for everything you did to make our trip to Italy so special. It pretty much was a perfect - and perfectly planned - vacation. Rome, Florence, Lucca, loved them all. Paolo and Sabrina were wonderful guides and all of the places we stayed were lovely. You did a great job. Loved Italy. Loved the people."—Mike and Nancy

"We just wanted to the tell you thanks for everything you did to make our trip to Italy so special. It pretty much was a perfect - and perfectly planned - vacation. Rome, Florence, Lucca, loved them all. Paolo and Sabrina were wonderful guides and all of the places we stayed were lovely. You did a great job. Loved Italy. Loved the people."—Mike and Nancy

I intend to use Massoni Travel in the future and will definitely recommend your services to my friends and family. I recently joined an Italian American Spirit Group that meets for dinner once a month and also plans events and trips to Italy. I will tell them at the next meeting how much we enjoyed your services. Also, it was the first time I had a travel agent check on us during the trip - very nice!" —Joan B.

Why Travel With Us?

Click here to read why travelers love to experience Italy with us. We do all the research and you get the Italian trip of your dreams!

Who needs another boring old newsletter? Join us and read about the latest adventures in our love affair with italy! And don't worry, the only thing that will be steaming is the pasta »

Learn about Italy with See Italy's expert videos, and wow your clients with exclusive insights on specialty travel in Italy. Click here to learn more »

Something To Write Home About

Check out our blog & subscribe to our newsletter
for insider travel tips on the authentic Italy! »